Interpolated maps are values representing a piecewise function defined by interpolation between a sequence of breakpoints.

They have been initally defined as piecewise linear functions which have been superseded by NIM (an acronym for New Interpolated Map). NIM extends the idea of interpolation between breakpoints to vectors and to a superset of the interpolation types available in the curve construct.

A NIM is an aggregate data structure that records the breakpoints of the piecewise interpolation and the interpolation type (as in a curve). A NIM is considered an extensional function like a map. It can be applied to a numerical value to return the corresponding image.

NIMs can be used as an argument of the curve construct which allows the breakpoints to be dynamically built, "playing" the function later in time. See section Curve Playing a NIM.

Continuous NIM are defined by an expression of the form: 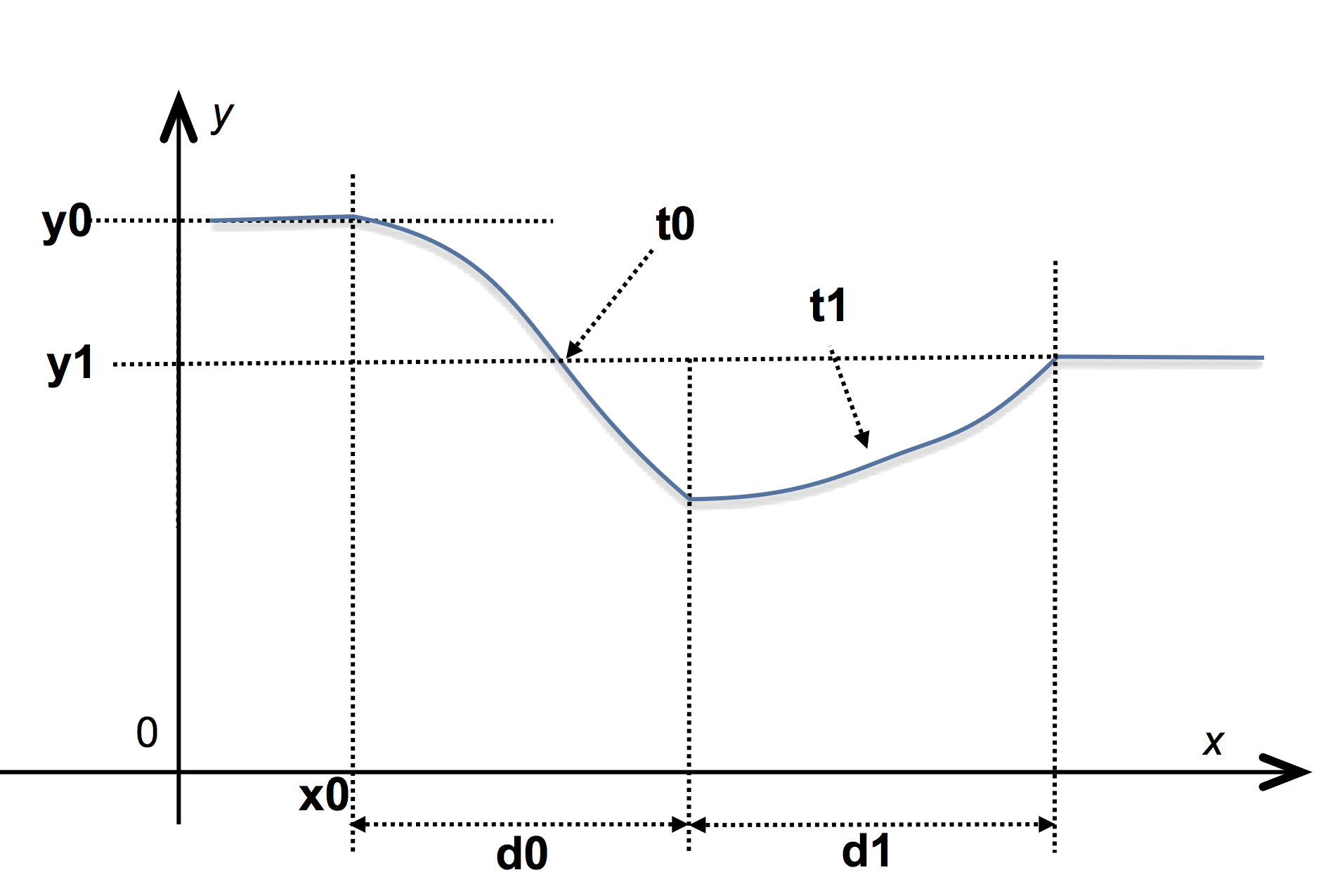 A second syntax allows one to define a discontinuous function by specifying a different value for the end of an interval and the beginning of the next one:

The definition is similar to the previous form except that on the interval [\mathtt{x}_i, \mathtt{x}_{i+1}] the function is an interpolation between \mathtt{y}_i and \mathtt{Y}_i. See illustration: 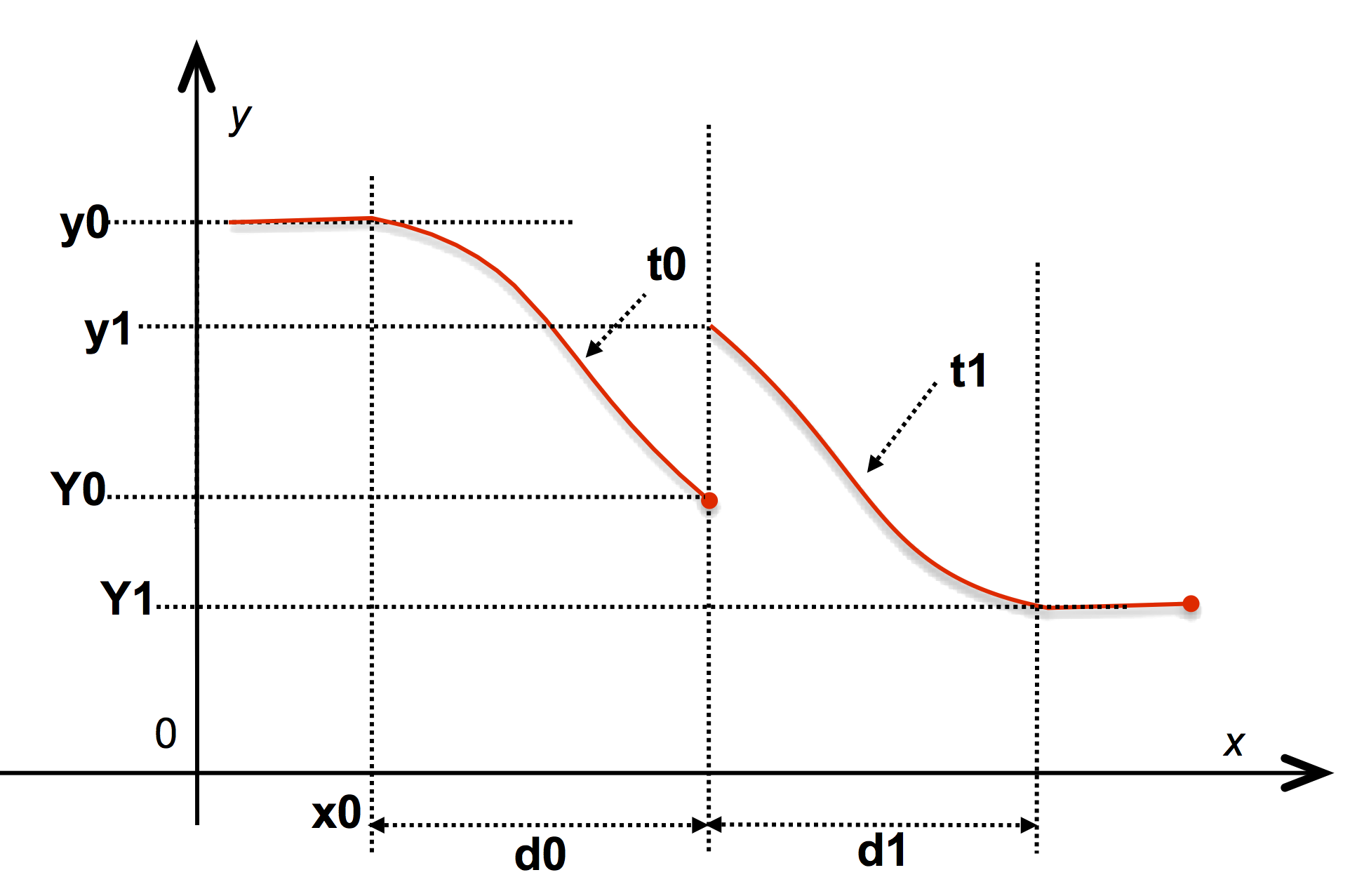 The parameters \mathtt{d}_i in a NIM expression are relative increments on the X axis that specify the duration of the breakpoints. It is possible to specify directly absisses using the § marker (remark that the marker § is also accordingly used to specify date-delays). For example

The use of absolute breakpoints can lead to non well-fromed nim specification, like

This error is non-fatal and the faulty breakpoints are set with an interval of zero.

Definition of the NIM outside the breakpoints¶

The function f is extended outside [\mathtt{x}_0, \mathtt{x}_n] such that

The NIM construct accepts tabs as arguments: in this case, the result is a vectorial function. For example:

The NIM construction is ‟smart”: the parameters of a vectorized NIM may mix scalar s and tabs. In this case, the scalar is extended implicitly into a vector of the correct size whose elements are all equal to s. This is the case even for the specification of the interpolation type. For example:

The function @dim returns the dimension of the image of a NIM, that is, 1 for a scalar NIM and n \not= 1 for a vectorized NIM, where n is the number of elements of the tab returned by the application of the NIM.

The function @size returns the number of breakpoints of the NIM (which is not equal to the dimension of the NIM). Note that a nim with zero breakpoints is the result of a bad definition.

A vectorial NIM can be seen as the aggregation of several scalar NIMs.

The functions @projection and @aggregate can be used to respectively extract a scalar nim from a vectorial nim and to aggregate several (scalar or vectorial) nims of dimension d_1, \dots, d_p into a nim of dimension d_1 + \dots + d_p.

This process can be used to build vectorial NIMs whose breakpoints are different, as in the specification of vectorial curves. There is no syntax to directly specify such NIMs and the function @aggregate must be used to build such NIM values that are said to have heterogeneous breakpoints. When printing such a NIM, the function @aggregate is used to list its many components: 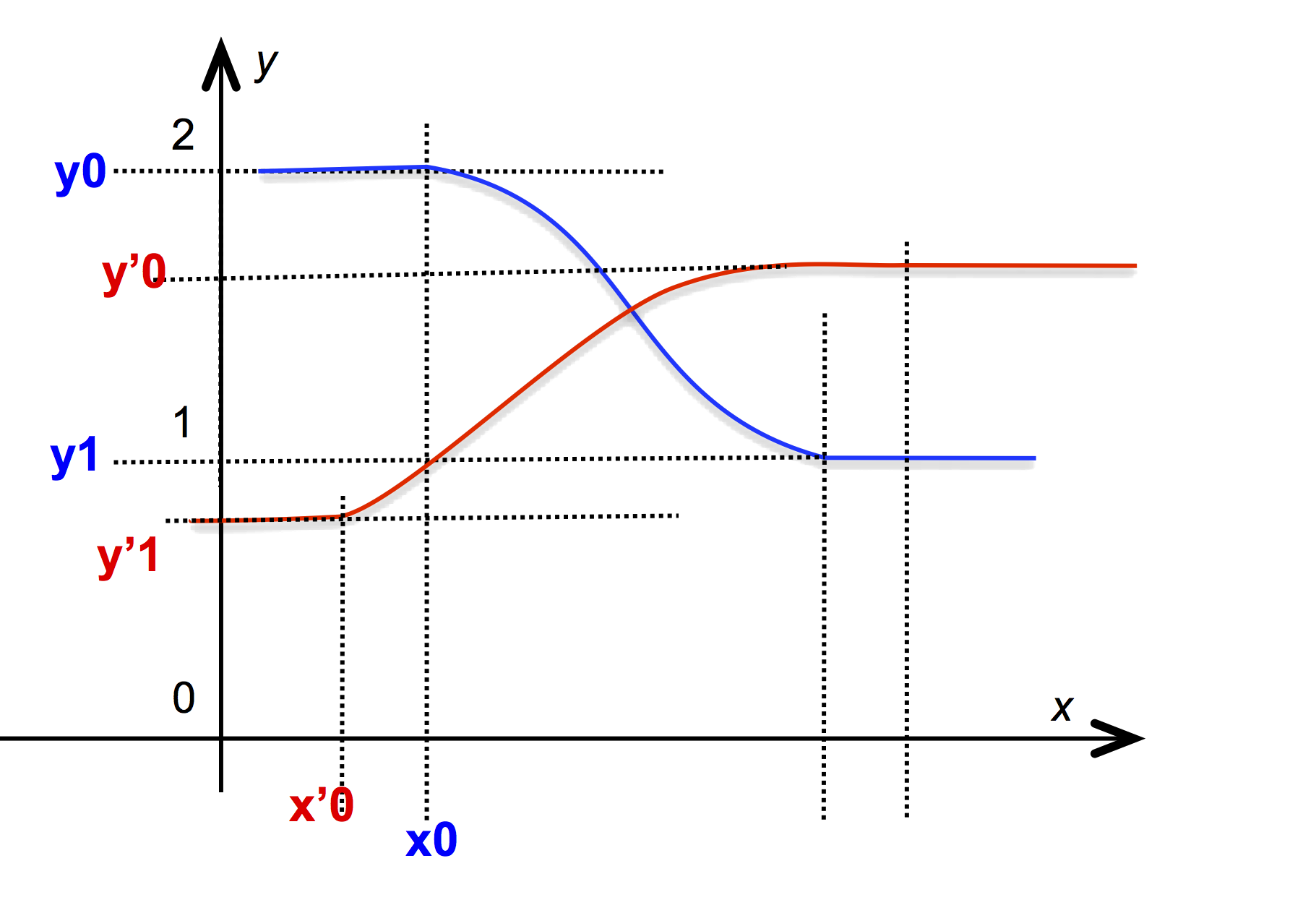 The function @projection can be used to extract a component from a vectorial NIM:

The function @push_back can be used to add a new breakpoints to an existing NIM. They are several variations:

Note that @push_back is an overloaded function: it can also be used to add (in place) an element at the end of a tab.

See their descriptions in the library. Here, we describe the notions that appear when a NIM is restructured.

The function @sample takes a NIM nim and a number n and returns a NIM with n breakpoints and linear interpolation type that approximates nim. The process is illustrated in the following diagram: the NIM $nim4 in input 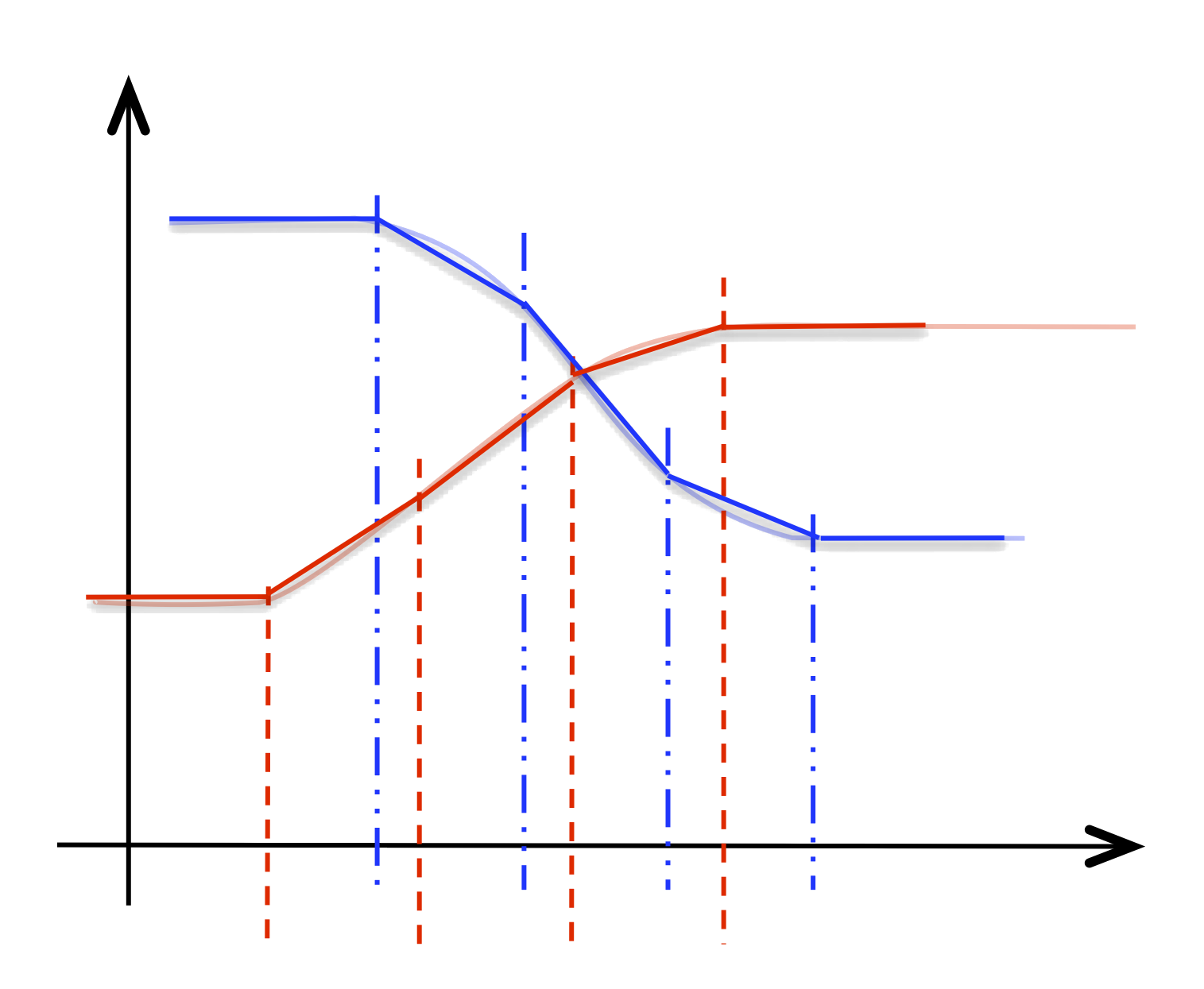 The function @align_breakpoints can be used on a NIM with linear interpolation type to obtain an equivalent NIM with homogeneous breakpoints:

will compute a NIM with a heterogeneous breakpoint printed as 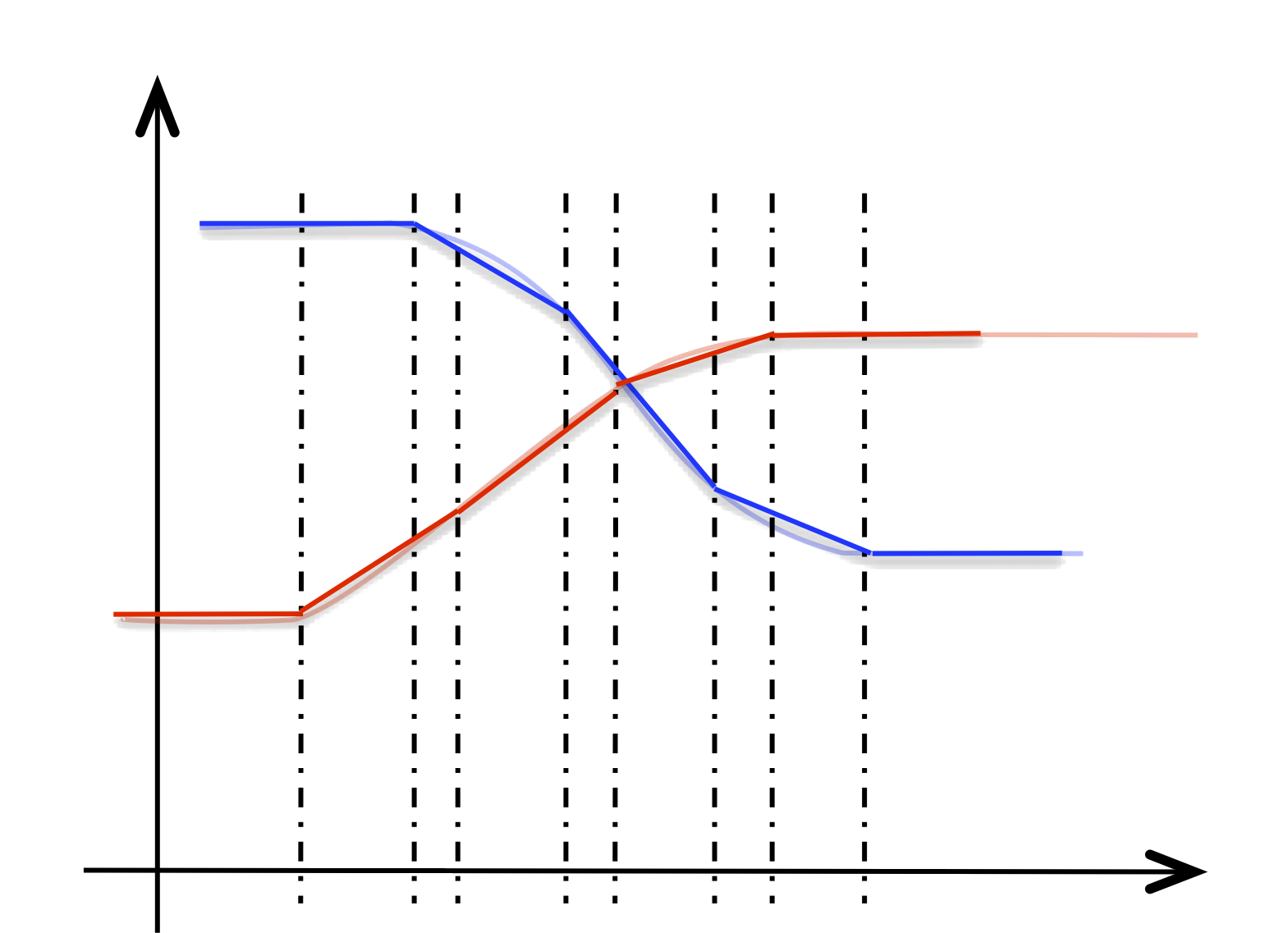 The function @sample samples its NIM argument homogeneously (component by component). This is not always satisfactory because the variation of the NIM can differ greatly between two intervals. The function @linearize(nim, tol) uses an adaptive sampling step to linearize nim, to align the breakpoints and to achieve an approximation within a given tolerance tol. 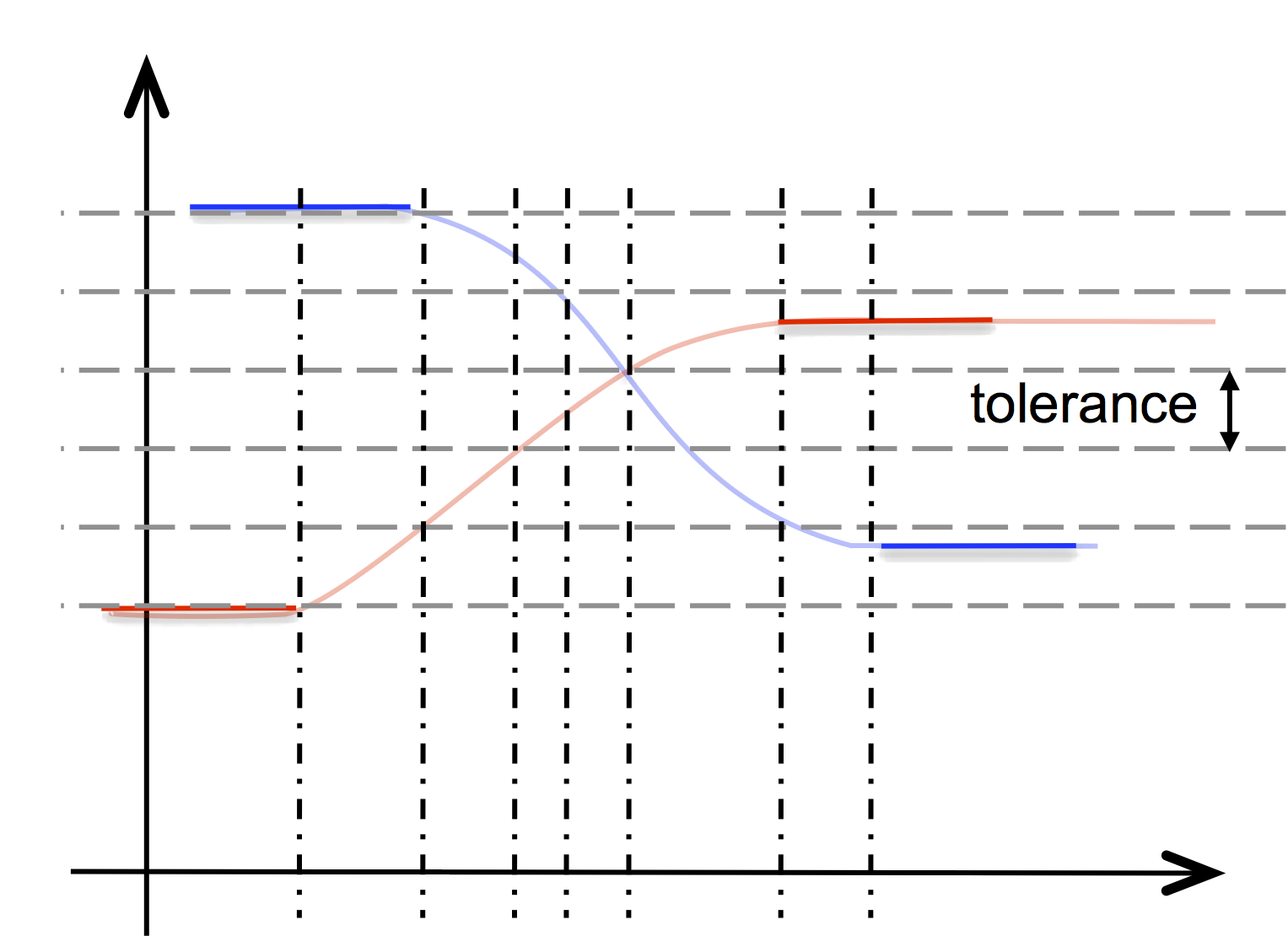 The application of the @linearize function can be time consuming and care must be taken so as not to perturb the real-time computations, e.g., by precomputing a linearization (see @eval_when_load clause and function @loadvalue).

NIMs can be used to record a temporal series of data arriving (through time) from the environment, using setvar or OSC messages. It is then often useful to simplify the NIM, in order to have a more compact representation. The underlying idea is that the NIM approximates a curve known by a series of points, the breakpoints of the NIM, and that this curve can be approximated by fewer points. The simplified NIM consists of a subset of the breakpoints that defined the original.

Several functions can be used to achieve a reduction of the number of breakpoints of a NIM with linear interpolation.

The effect of these simplification functions on a nim can be observed using the function @size which returns, for a nim, its number of breakpoints.

The functions described here work independently on each component of a nim. They see each component as a sequence of points y (the image of the nim) that are smoothed in various way. The resulting points are used to build a new nim with linear interpolation type. The number of breakpoints is preserved, as well as their x-coordinate. Only the y-part of the breakpoint (the image) is affected.