An Antescofo program is a sequence of events and actions. Events, recognized by the listening machine, are described in detail in chapter Events. Actions, outlined in chapter Actions are computations triggered upon the occurrence of an event or of another action. Actions can be dynamically parameterized by expressions and data structures, evaluated in real-time and described in detail in the Reference Manual.

Elements of the language can be categorized into six groups that correspond to various constructions permitted in the language:

User defined score elements including macros, processes and functions can only be employed after their definition in the score. We suggest putting them at the beginning of the file or to put them in a separate file using the @insert command. They will be discussed in proceeding chapters.

Simples identifiers denote Antescofo keywords. They are also used for the receivers of messages send to the host environment.

The Antecofo language comes with a list Reserved Keywords for defining elementary score structures. Reserved keywords are case insensitive. They can be divided in two groups:

Here is an example:

In the example above, rcvr1 harm1 60 87 0.5 and rcvr2 ampSy 0.8 2 are actions that are hooked to event NOTE 60 1/2, and 1/2 print HELLO denotes an action (sending to a receiver print in max/pd) with a delay of half-beat time. General syntax for atomic actions is described in chapter Atomic Actions.

REMARK: An Antescofo text score is interpreted from top to bottom. In this sense, Event Sequence commands such as BPM or variance will affect they events that follow their appearance.

Example: The figure shows two simple scores. In the left score, the second tempo change to 90 BPM will be effective starting on the event with label Measure2 and as a consequence, the delay 1/2 for its corresponding action is launched with 90 BPM. On the other hand, in the right score the tempo change will affect the chord following that event onwards and consequently, the action delay of 1/2 beat-time hooked on note C5 corresponds to a score tempo of 60 BPM.

A word begining with a ‘@’ character is called a @-identifier. They have five purposes in Antecofo language:

Only ! ? . and _ are allowed as special (non alphanumeric) characters after the @.

Users can define their own functions as shown in chapter Functions. These @-identifiers are case sensitive. Predefined functions are listed here.

$-identifiers like $id or $id_1 are simple identifiers prefixed with a dollar sign. Only ! ? . and _ are allowed as special characters after the $. $-identifier are used to give a name to variables (see section variables and as parameters for function, process and macro definition arguments. They are case-sensitive.

The figure below shows a rewrite of the excerpt of Pierre Boulez’ “Anthèmes 2” given here using a simple macro and employing basic @ and $ identifiers. The harmoniser command is here defined as a macro for convenience and since it is being repeated through the same pattern. The content of the hr1-p to hr4-p actions inside the Macro use a mathematical expression using the internal function @pow to convert semi-tones to pitch-scale factor. As a result the Antescofo score is shorter and musically more readable. Variables passed to the macro definitions are $-identifiers.

You can learn more on expressions and variables in chapter expression onwards. 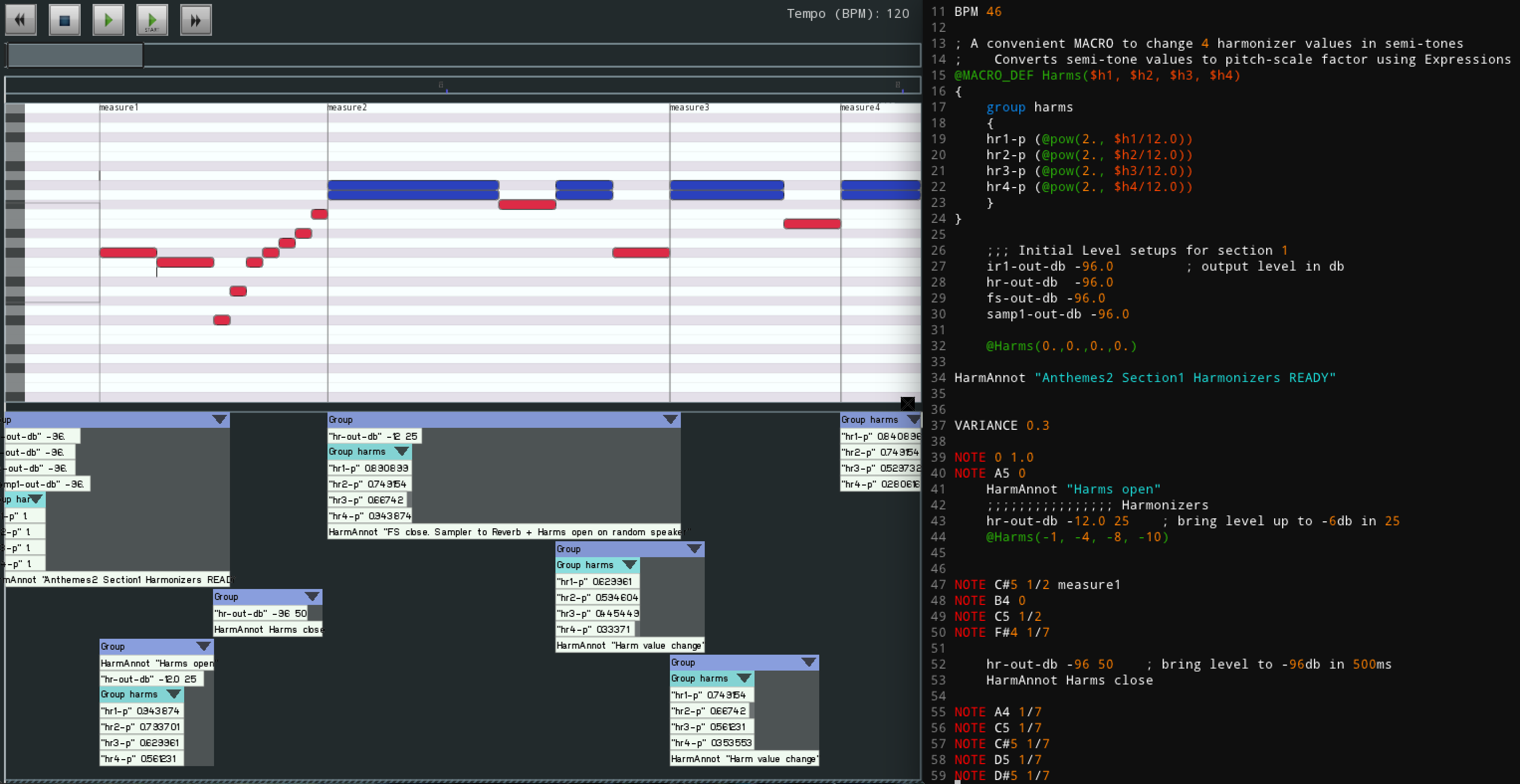 ::-identifiers like ::P or ::q1 are simple identifier prefixed with two semi-columns. ::-identifiers are used to give a name to processus (see chapter Process).