A Brief overview of Antescofo features¶

This section introduces some features that are very useful, especially for composers. If you are interested to learn more, take a look at the corresponding chapters in the Antescofo reference. Remember that everything having to do with control in Max or PD could certainly be replaced by an Antescofo Program. You will see that you can easily manage tabs, lists and some features that you need to control all the parameters of a concert patch.

A useful action : the curve¶

One of Antescofo's useful Keywords is the curve. Many composers use automations in their sequencers or use some "line" in Max. In Antescofo, you can write a large ensemble of curves (with many interpolation types) and create a score that controls all the effects, spatialization and synthesis with this curves. All the receivers in your Max or PD patch can receive the updated variable controlled by a curve.

The example below shows 3 simple curves with different types of interpolation. A receiver named "print" will receive the variables $x, $y and $z.

The next example shows two ways to write a same thing.

Sometimes, the situation calls for a loop (ask to Steve Reich! 👏). You can use many loops and imbricated loops in Antescofo. For example, you can include a curve in a loop and dynamically modify it while advancing the the loop time. There are many ways to end a loop. Guess what will happen in the following examples:

In Antescofo, you can create your own functions (see @fun_def) if you frequently need to carry out the same task (to set a diapason, for example). There are many features that help create musical entities and facilitate electronic score writing.

Why do you need data structures...¶

Data structures come in handy in many situations. Some effects and syntheses involve a long list of parameters. In the Data Structures chapter, you will see many ways to create and manipulate different kinds of lists and data structures (see map and tab).

In the classical music notation, there are many symbols that each denote an ensemble of parameters. These symbols permit the musician to focus on the music and not on the parameters. You can have the same approach in Antescofo if you use macros, processes and data structures. For example, if you use a physical model for synthesis, it's very laborious to enumerate all the parameters in your score. In this case, you can use an ensemble of tabs as a “playing mode” library. So in your score, you will just have to write the name of the tab and not the ensemble of parameters. Like when you write Sul ponticello you don't have to describe to the musicians how to play that !

The figure below shows a short library for a string physical model and a process that permits interpolation between two “playing modes”. Don't worry about understanding all the syntax (that's what the reference manual is for) but remember that it's possible! 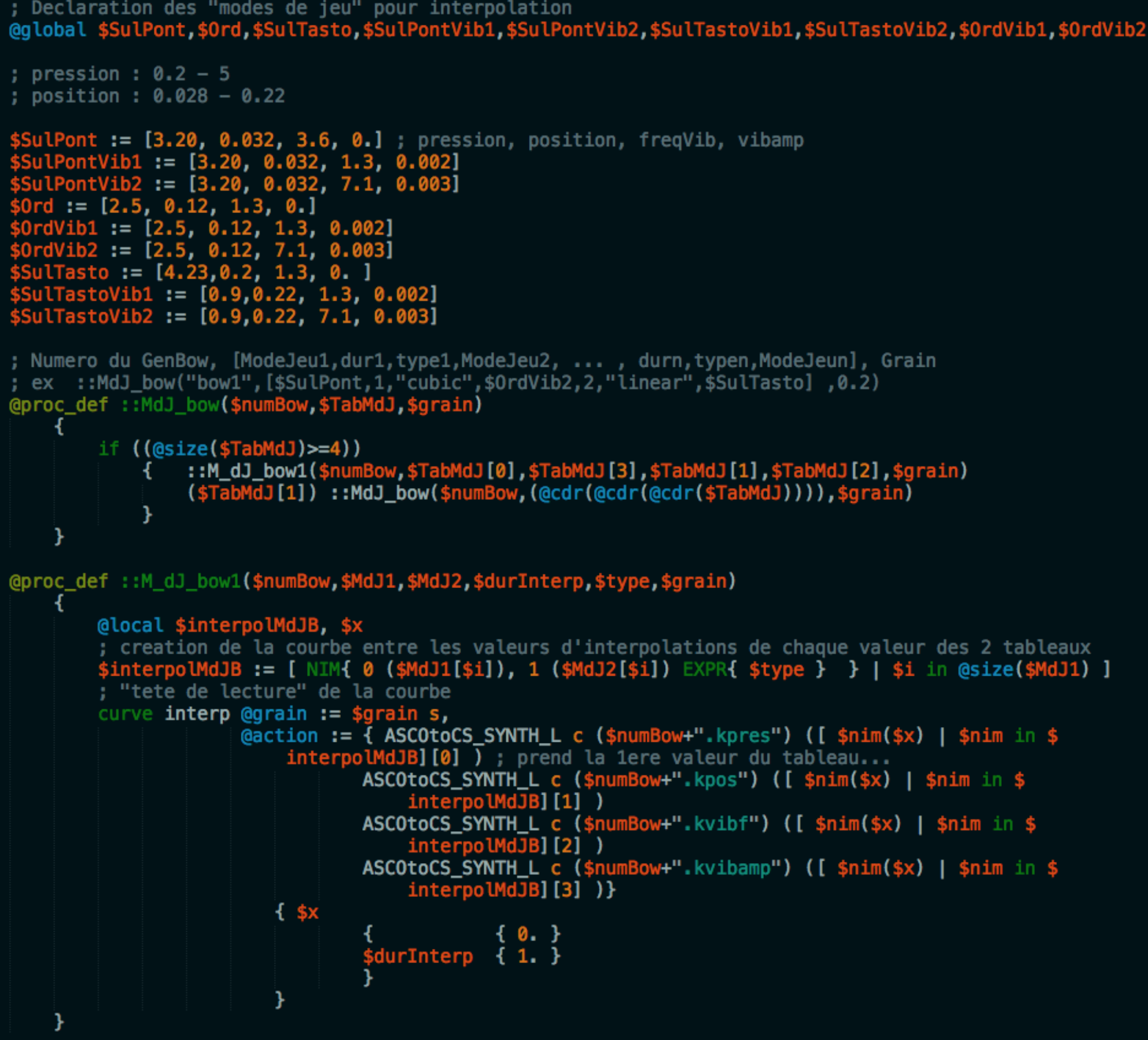 You can use the same type of program to write a "spatialization" library (see the Stroppa/Cont Library) where you can write a simple command in the score that will make a complex movement in the space.

If you have to create complex processes that can heard some extra-parameters of the score (like audio descriptors, patterns....), Antescofo provides some dynamic features like the whenever or the processus that permit to write a real musical entity with some musical evolutions.

This process are different, in the way of thinking, of the classical score. The process is a kind of "deamon" that can be launched when it's needed and that can be aborted at the good moment. The process move in parallel with the score but take account of the musician's tempo (see $RT_TEMPO).

In the figure below, a musician can choose a path in an ensemble of short extracts. Different zones are associated at this extracts. In the score, some atomic actions are classicatly played with the score of musician, in a sequencial way. In parralel, a process is launched and evolve depending on area where the musician is. The process can be seeing as an entity that evolve both with the musician and its own independant evolutions. 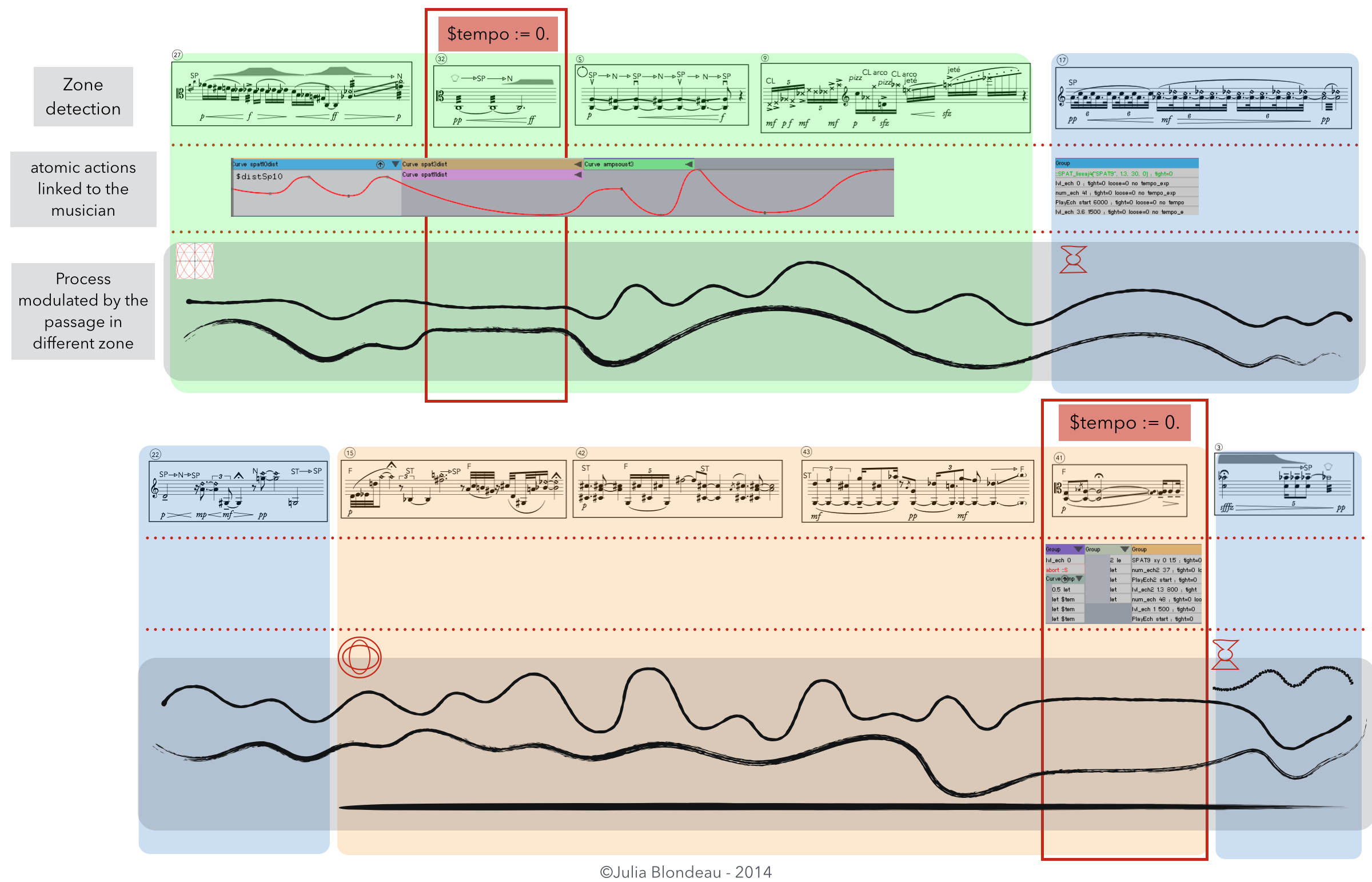 Create your own process, macro and function library that you use in all of your pieces.

Sometimes we need to specify conditional actions. In Antescofo, the constructions if and switch are made for that. A conditional action is a compound action that performs different actions depending on whether a programmer-specified boolean condition evaluates to true or false.

You want launch a group of actions only if the musician plays at a particular amplitude ? You have to use this kind of code :

But, note that this kind of if is evaluated when it is launched. So... it is useful but you maybe have to watch at variable during all the time of the performance. In this context, you need a dynamic construction that look permanently the value of your variable. You need the whenever construction! In the same idea of before, if you want to know when your musician is playing too loud, you can write something like this :

When the whenever statement is launched, the variable that it's given is permanently monitored and you will always know when the whenever's condition is true.

It's as easy as pie!

In Antescofo, all the electronic actions are launched in the musician's time. The internal variable $RT_TEMPO give the tempo of the musician in real time. So, when you write your score, you can be sure that it will be synchronize with the musician (if you interested by the synchronization question, take a look at the chapter Synchronization Strategies).

So, in Antescofo language, all the group, process, loop, curve ... can be “time controlled”. This means that for each group, you can impose a tempo (BPM) or better: an evolution of tempo !

The attribute @tempo is made for that. If you see the previous example, you can see that for two periods of time, the process is like “time freezed” and you can see ::antescofo $tempo := 0 that is a simple example where you can stop for a moment any instance if you put its tempo at 0.

In the next example, a group fusee composed with atomic actions ::ASCOtoCS_points ... is time controlled by the variable $tempfusee. This variable is modified in time by a curve that give a phrasing to the group. 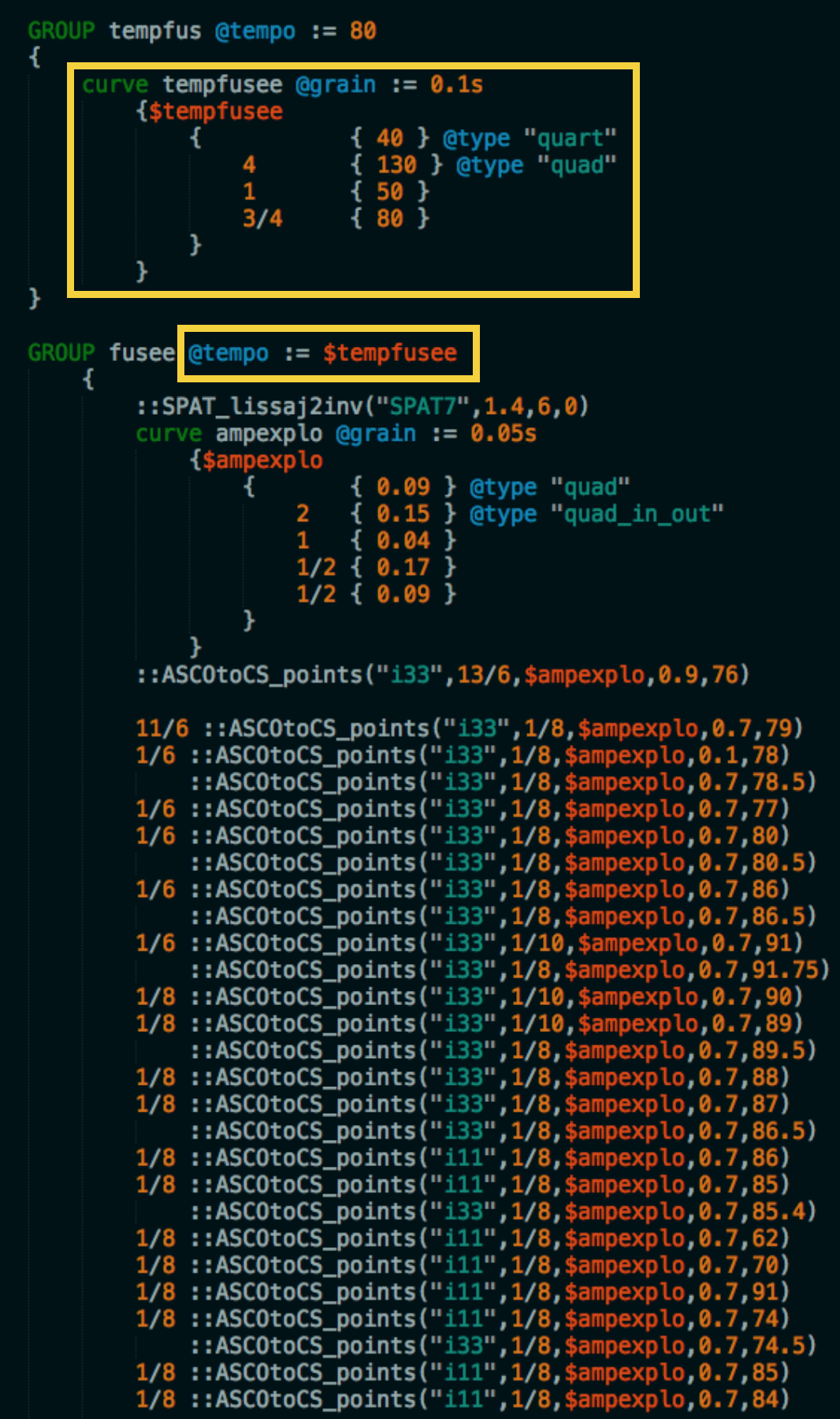