In this chapter, we will see how to work with Antescofo, from the edition of the score to the interactions with Max, PureData or other softwares through OSC.

The first step in the development of an Antescofo Application is probably the authoring of the augmented score. An augmented score is a text program and can be edited with any text editor (like Sublime, TextWrangler or Emacs but not with a text processor like Office/Word).

Older versions of Antescofo comes with a companion application: Ascograph. Ascograph is a graphical tool that can be used to edit and then to control a running instance of Antescofo through OSC messages. This tools is now deprecated because it cannot handle the full range of the language. Ascograph can still be used on very simple Antescofo score but is usage is no longuer supported. Most of the command available in Ascograph to drive a running Antescofo instance in Max are also available, e.g. from the Sublime editor, using the dedicated mode. Take also a look at function @bach_score which makes possible to export an Antescofo score to Bach in order to visualize the piano roll of the musical events and to follow in real-time the progression in the score. See the bachscograph patch proposed by Serge Lemouton.

Very often, the musical events to follow have already been specified through a score editor (Finale, Sibelius ...), or exist as a MIDI score.

It is possible to automatically import MIDI or MusicXML scores to Antescofo format to spare the burden of rewriting the followed part. This feature is available by drag and drop a MIDI or MusicXML file into a dedicated web page: https://antescofo-converter.ircam.fr/ A command line version of this converter exists but the online converter must be the approach must be preferred approach.

For multiple instrument score, care should be taken to extract required part in a separate MIDI or MusicXML file. The result is an Antescofo score that can then be modified at will.

The conversion can be also produced by a standalone application (termoinal mode) which offers additional options.

Users employing these features should pay attention to the following points:

The major problem with MIDI format is the absence of grace notes, trills, and glissandi. Such events will be shown as a series of raw event elements in the score.

Another major issue with MIDI import is the fact that in most cases, timing of note-offs are not decoded correctly (based on where the MIDI is coming from). Bad offset timing creates additional event with linked pitches (negative notes) with short durations. To avoid this, we recommend users to quantize their MIDI files using available software. The Antescofo importer does not quantize durations.

MusicXML is now the standard inter-exchange score format file between various score editing and visualisation software. It includes high-level vocabulary for events such as trills, grace notes and glissandi which can be converted to equivalent events. However, decoding and encoding MusicXML is not necessarily unique for the same score created by different software!

The Antescofo MusicXML import is optimized for MusicXML exports from FINALE software. Before converting MusicXML score to Antescofo, users are invited to take into account the following points and to correct their score accordingly, especially for complex contemporary music scores:

This feature is still experimental and we encourage users encountering problems to contact us through the Online User Group. 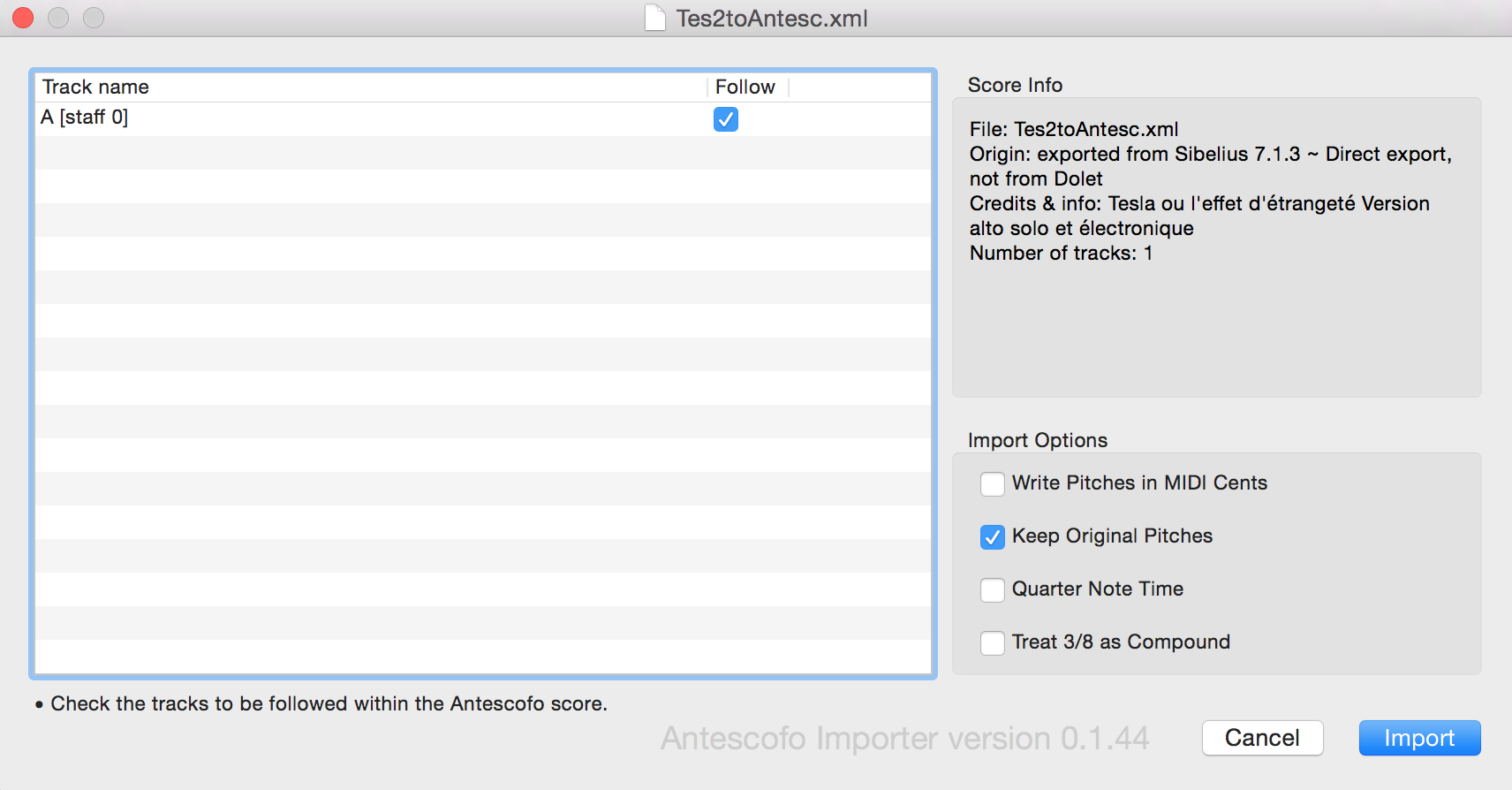 The information given here is given only for those that are still able to use ascograph on simple Antescofo score. Ascograph is no longer supported.

An Antescofo score is a simple text file and can be edited by any text editor like Sublime, Emacs, Atom, etc.

Max users can also use the Antescofo Max Object Autowatch attribute. This means that if the loaded score is modified elsewhere, it'll be automatically reloaded in the Max object. Obviously, you'd want to turn this attribute off during live concerts! Autowatch is currently not available for PureData objects.

For the people that prefer use their own beloved text editor, we have created some syntax highlightings for Sublime Text, TextWrangler and... emacs ! You have just to download them in our Forum. The [plugin]((https://discussion.forum.ircam.fr/t/antescofo-v0-92-and-sublimte-text-editor/2021) for Sublime offers also some keyboard shortcuts to control a runing Antescofo instance (through OSC messages).

Antescofo scores can be pretty big and it is important to grasp the elements at first glance. A syntax highlighter as third party packages exists for Sublime, Atom and Emacs look at our Forum.

Antescofo scores can also be embedded in markdown (as illustrated by this documentation) using the Pygment highlighter or in latex using the lstlisting with a dedicated style.

The automatic indentation provided by editors like Sublime for Antescofo score is basic. It is always possible to send a printfwd message to the antescofo object. This command will write a file with an automatically indented version of the score together with various additional information (depending on the current verbosity). This file can be loaded again in Antescofo. Notice however that macros are expanded in this score and that the initial comments are not reported.