An event in Antescofo terminology refers to elements that define what will probably happen outside your computers for real-time detection and recognition. In regular usage, they describe the music score to be played by the musician to follow. They are used by the listening machine to detect position and tempo of the musician (along other inferred parameters) which are by themselves used by the reactive and scheduling machine of Antescofo to produce synchronized accompaniments.

The listening machine is in charge of real-time automatic alignment of an audio stream played by one or more musicians, into a symbolic musical score described by Events. The Antescofo listening machine is polyphonic and constantly decodes the tempo of the live performer. This is achieved through explicit time models inspired by cognitive models of musical synchrony in the brain which provide both the tempo of the musician in real-time and also the anticipated position of future events (used for real-time scheduling).

This section describes Events and their syntax in Antescofo language. In a regular workflow, they can come from pre-composed music scores using MusicXML or MIDI import (see section score import). They can also be composed directly into the Antescofo text program.

Events are detected by the listening machine in the audio stream. The specification of an event starts by a keyword defining the kind of event expected and some additional parameters:

Here the ’*’ is a metacharacter meaning “zero or more repetitions” of the preceeding construction. Elements between square brackets ’[’ and ’]’ are optional but parentheses are literal elements that do appear in the code (they are not metacharacters).

Events specification can be optionally followed by some attributes as discussed in the Event Attributes section below. Events must end by a carriage return. In other word, you are allowed to define only one event per line.

There is an additional kind of event

Parameters for event specification are described below.

pitch (used in NOTE) can take the following forms:

Pitch_list is a set containing one or more pitches (used to define content of a CHORD). For example, the following line defines a C-Major chord composed of C4, E4, G4:

Duration is a mandatory specification for all events. The of duration an event is specified in beats either by an integer (1), the ratio of two integers (4/3) or a float (1.0).

Optionally, users can define labels on events as a simple identifier or as a string, useful for browsing inside the score and for visualisation purposes. For example measure1 is an accepted label. If you intend to use space or mathematical symbols inside your string, you should surround them with quotations such as "measure 1" or "measure-1"

Each event keyword in Antescofo in the above listing can be seen as a container with specific behavior and given nominal durations. A NOTE is a container of one pitch. A CH0RD contains a vector of pitches. The figure below shows an example including simple notes and chords written in Antescofo: 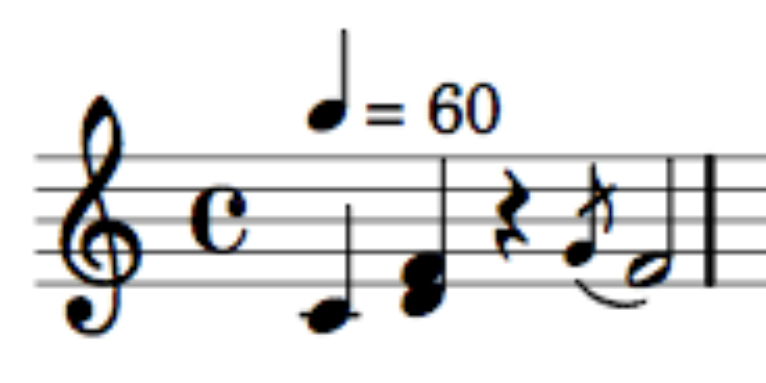 Similar to trills in classical music, a TRILL is a container of events either as atomic pitches or chords, where the internal elements can happen in any specific order. Additionally, internal events in a TRILL are not obliged to happen in the environment. This way, can be additionally used to notate improvisation boxes where musicians are free to choose elements. A TRILL is considered as a global event with a nominal relative duration. Figure below shows basic examples for Trill. 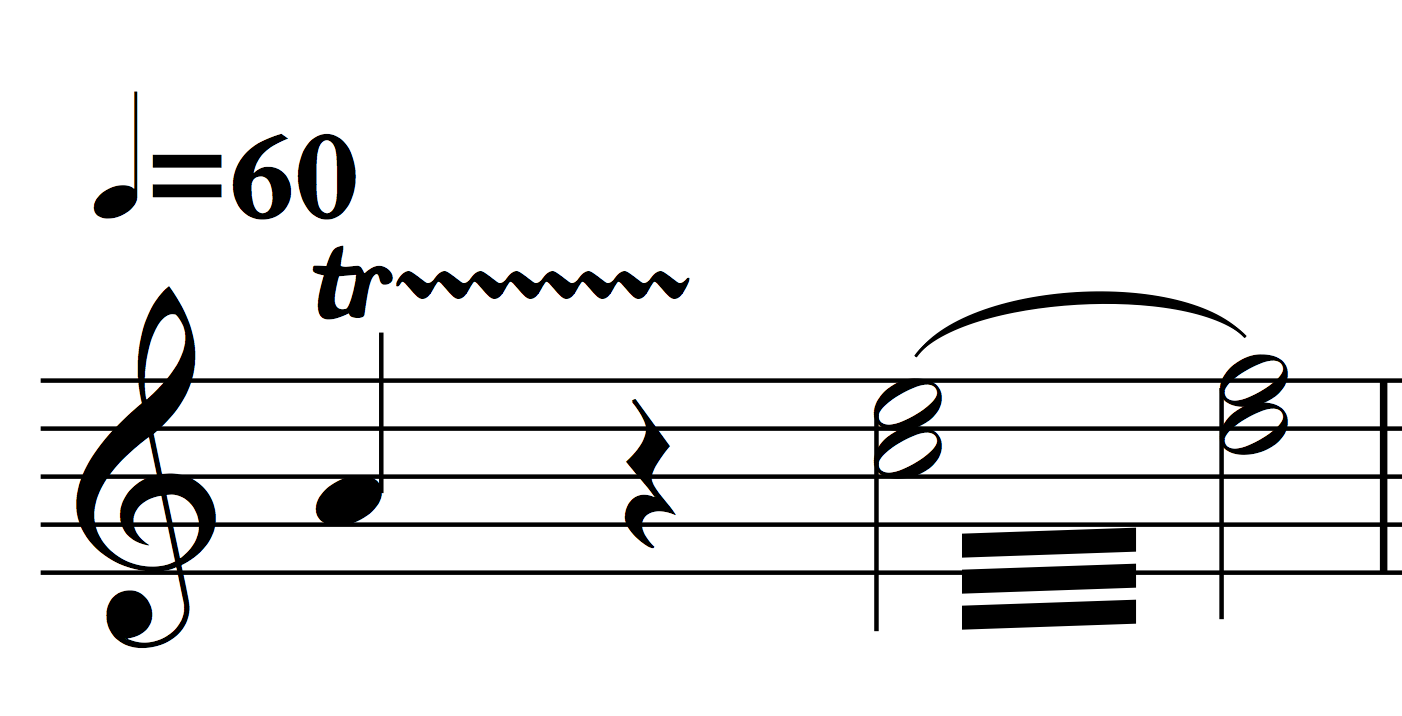 Similar to TRILL, a MULTI is a compound event (that can contain notes, chords or event trills) but where the order of actions are to be respected and decoded accordingly in the listening machine. They can model continuous events such as glissando. Additionally, a MULTI contents can be trills. To achieve this, it suffices to insert a character after the pitch_list closure. The next example shows a glissandi between chords written by MULTI.

Events can be combined and correspond to specific music notations. For example, a classical tremolo can be notated as a TRILL with one event (note or chord) inside. The next figure shows a glissando whose internal elements are tremolo. In this case, the prime ' next to each chord group indicate that the elements in side the MULTI are TRILL instead of regular notes or chords.

The figure below shows a typical polyphonic situation on piano where the right-hand is playing a regular trill, and the left hand regular notes and chords. In this case, the score is to be segmented at each event onset as TRILL whose elements would become the trill element plus the static notes or chords in the left-hand.

Attributes in Antescofo are keywords following an @ character after the definition of the event. There are four kinds of event attributes and they are all optional.

These attribute can be given in any order. For instance:

defines an event labeled by here which is potentially followed by the next event (in the file) or the events labeled by l1 or l2 in the score. It has a fermata attribute. Note that

corresponds to the same specification: here is not interpreted as the argument of the jump but as a label for the event because there is no comma after l2.

A simple identifier or a string or an integer acts as a label for this event. There can be several such labels. If the label is a simple identifier, its $-form can be used in a expression elsewhere in the score to denote the time in beat of the onset of the event.

BPM and the @modulate Attribute¶

A BPM command specifies the required tempo for the musical events that follow (up to the next BPM specification). As for the usual scores, this specification is a requirement that is followed more or less rigorously by the musician. The actual tempo followed by the musician is infered by the listening machine from the occurence of the musical events. This tempo infered in real-time is used for the scheduling of the electronic action. The BPM specification is an
information used by the listening machine to start the inference of the actual tempo, but the two differs.

The @modulate attribute can be used on a BPM specification, not on an event. It specifies that the tempo must be modulated to the pro rata of the actual tempo of the performer. For example, if a BPM 60 is specified in the score, and the actual tempo of the performance if 70, then an indication of BPM 80 @modulate reset the tempo expected by the listening machine to 80 \times \frac{70}{60} \simeq 93.3.