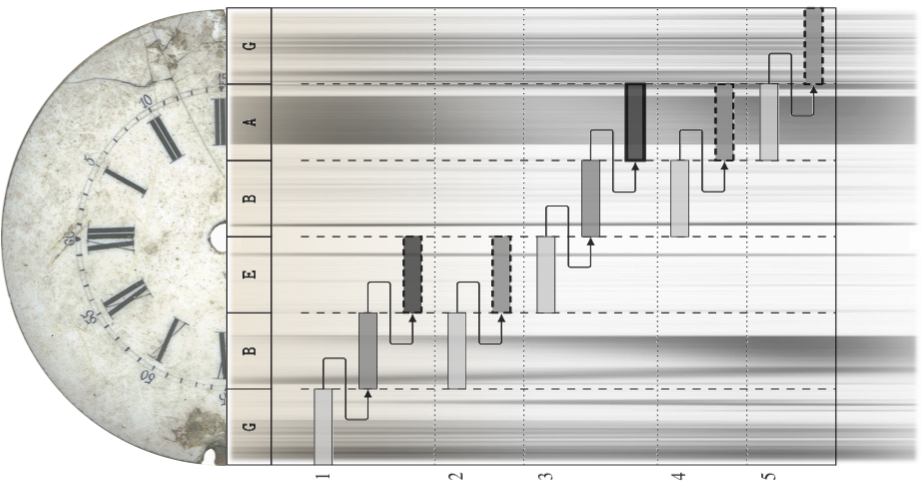 The Thickness of an instant¶

Each action performed by Antescofo occurs at some date and it may happen that several actions must be performed simultaneously “in the same logical instant”. This can be a problem. For example consider the fragment:

The two groups are launched in parallel and they schedule two incompatible assignments to be performed at the same date, after the expiration of a delay of one beat. The problem is to know what will be printed when we print the value of $x? If we assume an “ordinary” parallel execution, the outcome is not defined and the result is either 0 or 1 but not deterministically: it varies from one execution to the other.

The synchrony hypothesis used in the development of real-time embedded systems assumes that the actions that occur at the same date are performed in a specific and well defined order. Antescofo fulfills the synchrony hypothesis and the purpose of this section is to explain the execution order used to schedule actions at the same date. The rule is simple:

*Two action instances that occur at the same date are ordered by their order of appearance in the score and if they are instances of the same action, they are ordered by seniority, *except* for the body of a `:::antescofo whenever` that are performed following their causal activation order as soon as possible*.

Achieving a deterministic execution was a major goal for Antescofo. So we describe in great details the ordering of simultaneous actions. However, the rest of this section can be skipped in a first reading.

A first remark is necessary: in this is section, when we speak about actions scheduled at the same date, we refer to two actions that must be performed at the same physical date, irrespective of their specification in the score.

Two actions that are specified at the same date in the score may well lead to two distinct execution dates. For example, in

the two assignments, which occur at the same date in the potential time of the score, may not happen at the same date during the performance because the groups H1 and H2 do not have the same synchronization strategy:

These two instants are not necessarily the same: event D3 may occur earlier or later than the specification given in the score. Thus, the value of $x depends of “external” events (the musical events produced on stage) even if they coincide in the score. These external events are not deterministic and do not depend on Antescofo itself.

Conversely, two unrelated actions may, by chance, occur at the same date. For example:

The two assignment to $x occur at the same date because the sum of the delays occurring from the initial event (the occurrence of the musical event which triggers the actions) are the same (2+3 = 3+2). If they are really unrelated, their execution order probably does not matter. But there are other cases when two actions are clearly related in the score, are scheduled for the same date, and indeed are executed at the same date. In this case, order matters and the behavior of Antescofo must be easy to understand, deterministic and relevant.

The Syntactic Ordering of Actions¶

The presentation in this paragraph and the next, does not apply fully to the actions spanned by a whenever which will be discussed below.

With the exception of whenever, the execution order followed by Antescofo is simple: when two actions are scheduled at the same date, the syntactic order \prec of appearance in the program is used to determine which one is scheduled first. The syntactic order is roughly the order of appearance in the linear score but takes into account the nesting structure of compound actions.

More precisely, a vector of integers w(a), called the location of a, is associated with each action a. This vector locates uniquely the action a in the syntactic structure of the score. Two actions a and a' scheduled at the same date are performed following the lexicographic order of their location w(a) and w(a').

In the next example, we write vectors by listing their element separated by a dot: 1.2.3 is the vector with the three elements 1, 2 and 3. The location w(a) associated to an action a is build as follows:

The lexicographic order is best explained in an example. The localization of each action is given on the left

and the actual trace is

This program exhibits several actions that occur at the same date:

A Full Temporal Address with 3 Components¶

The syntactic order is based solely on the syntactic structure of the score and neglects the difference between an action and the (multiple) realizations of this action (called instances): for example, an action a in a loop is performed at each iteration. All of these instances are associated to the same location w(a). To compare these actions, that share the same location, we use their instance number.

This way, the temporal address of the execution of an action a has 3 components:

The resulting order \ll is total: two different actions a and b are always comparable and a \ll b or b \ll a. Thus, this order entails a deterministic execution. The order \ll is not necessarily the order which is needed and there is no way to alter it in Antescofo. However, the corresponding scheduling seems relevant on several paradigmatic examples.

For instance, a classical problem is given by two nested loops: 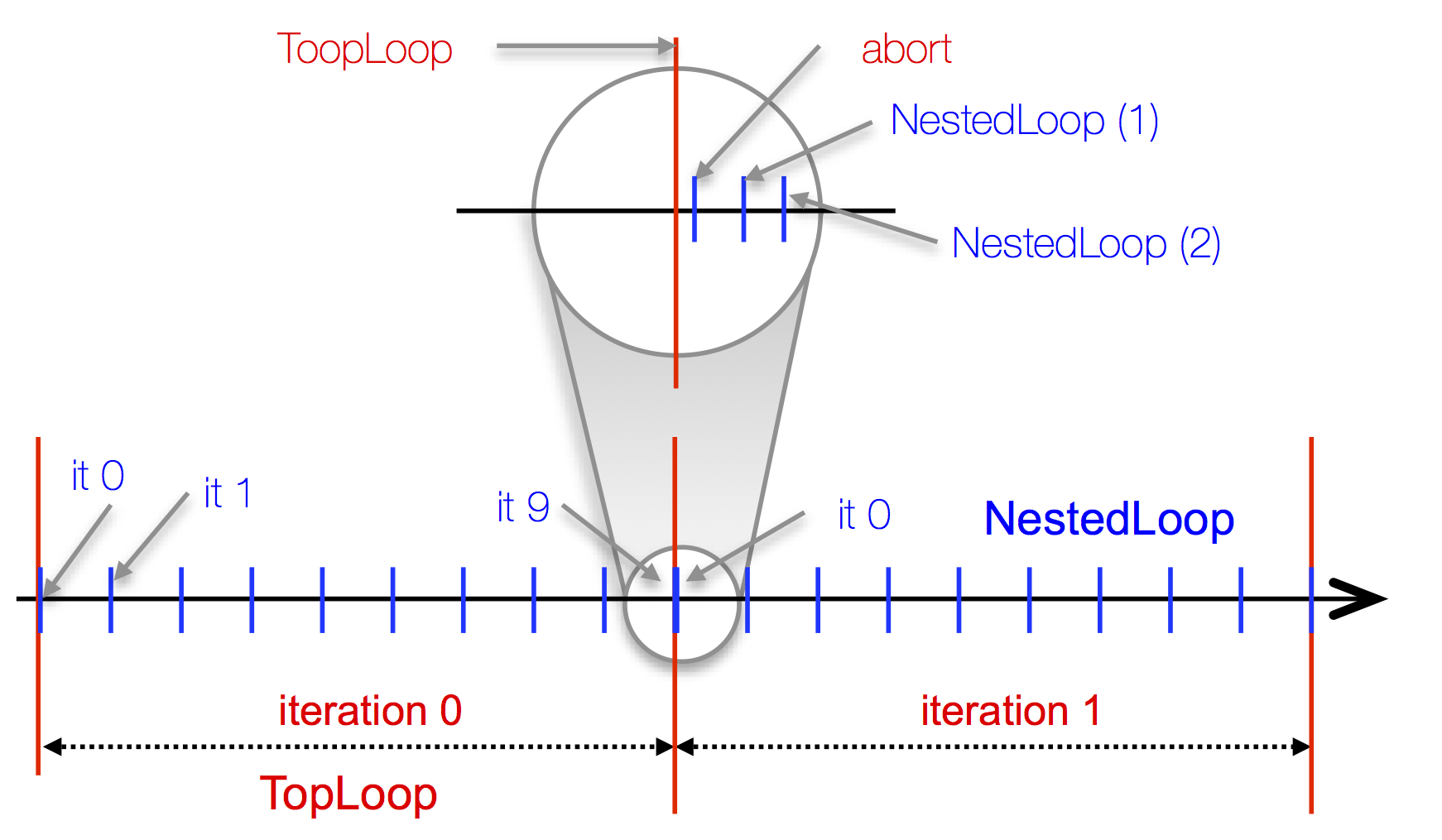 The loop TopLevel iterates a nested loop NestedLoop which assigns variable $X. The command launched at iteration n of the TopLevel loop is supposed to kill the NestedLoop spanned at the previous iteration to avoid two assignments of $X at the same date. The situation is pictured at the left of the program. Remark that the expected behavior can be achieved without an explicit abort using the @exclusive attribute.

The final value of depends on the order of executions of these three instances. For example, this result differs if the abort command is issued after the two assignments or before. Because we have $$ (i, 2.1, 10 i) \ll (i, 2.2.1.1, 10 i) \ll (i, 2.2.1.1, 10 i + 1) $$ the command abort is issued first and cancel the 10th assignment. So, when ::antescofo TopLoop is reiterated, there is only one assignment that corresponds to the first iteration of the new NestedLoop.

Whenevers span the execution of their body when activated by variable’s assignments. Thus, if an activation occurs at the same date as the firing of another action a, the order of the two depends of relative order between the assignment and a: the whenever body is activated as soon as the variable is assigned and if two whenevers are activated by the same variable, they are activated following their syntactic order. The resulting ordering cannot be solely deduced from the syntactic structure of the score. It is however deterministic.

Here are several examples. In the following fragment:

the trace produced shows that W1 is activated before W2. Indeed, the two whenevers are activated by the same cause: the assignment to $x. In this case, the whenever are activated following the syntactic order explained above.

The next example shows that the order of activation is dynamic, i.e. it may depend of the values of the variables


In addition, do not forget that a whenever is activated at most once in a logical instant. So in the trace of the following fragment:

A and B appear only once.