This how-to details a possible coupling between Open Stage Control and Antescofo through a simple example available here.

Open Stage Control is a libre and modular OSC / MIDI controller. The functionnalities are similar to touchOSC, Lemur or Mira:

The architecture and the modus operandi is sketched in the following schema: 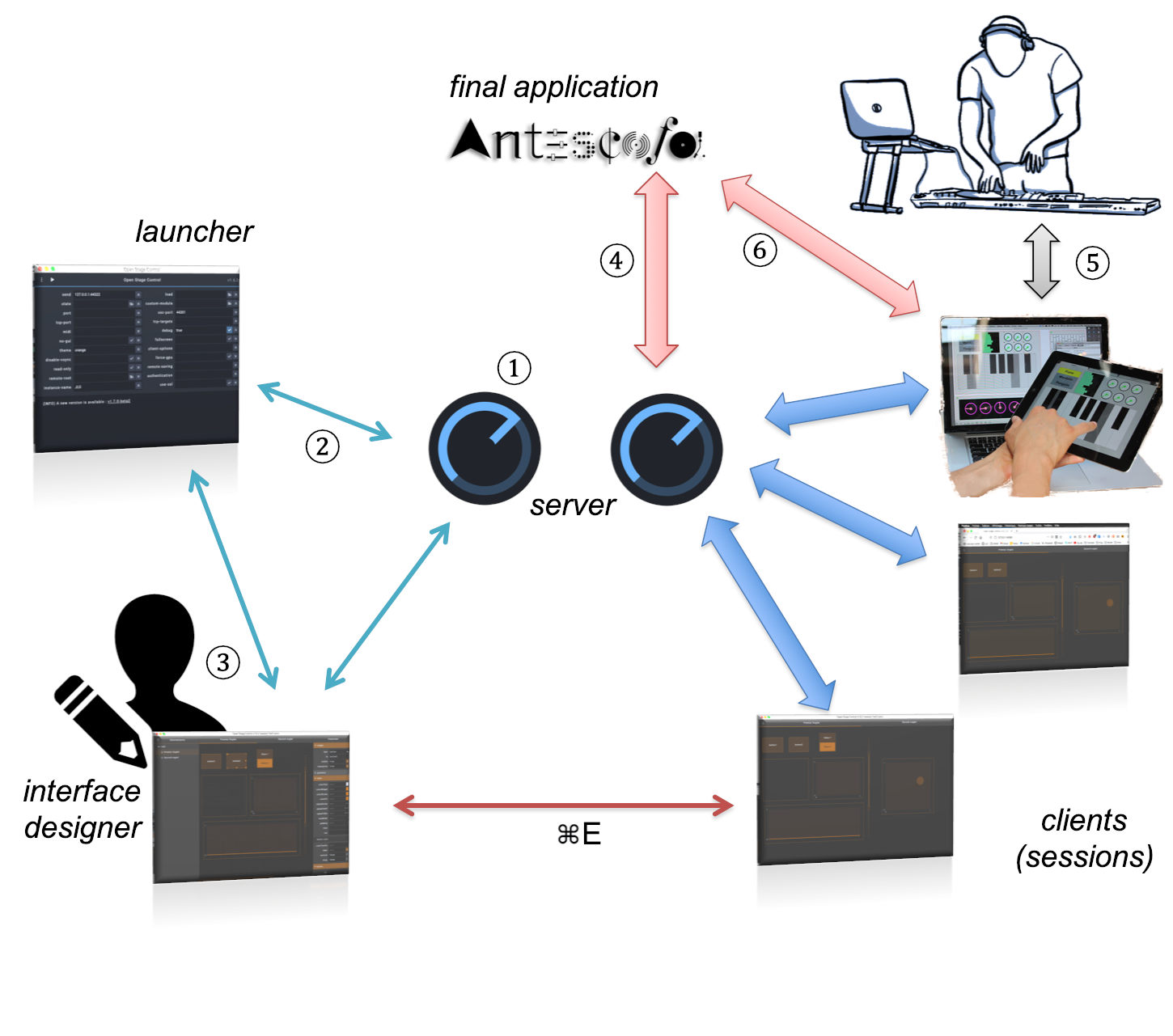 The distinction between steps (1-3) and steps (4-6) is artificial. Once a session is launched the client and Antescofo can interact and the client ca be switched in edition mode and back, anytime, relying on the same server.

In the rest of this section, we will detail the coding of the example. This implementation is a toy implementation used to illustrate the approach. It must be seen as a template calling for enrichments and tailorization.

The simple example relies on a preexisting session file and on the libOpenStageControl library. Both are given in the zip file.

Loading the score exemple1.asco.txt in your standard patch (for instance, the Antescofo patch provided with the turorial) and starting the score, you have a window with predefined widgets that appear. The following screenshot give you the appearance of this window, when you select the first tab (by default) or the second one.

We will explain in detail the implementation of the library after presenting the code of the example. The example file starts by including the library.

Then a minimal behavior is defined to answer the OSC messages emitted by the widget during their interactions. We handle only two widgets identified by "button1 and fader_1. The reception of OSC messages with these headers must trigger a function or a process. Here we use respectively functions @default_reaction and @fader. The behaviors are collected into a MAP:

The session configuration file which defines the user interface is located in the same directory as the Antescofo score and we compute its path:

We have now all the information to instantiate an OpenStageControl object (defined in the include file):

Now we can interact with the client launched by the server. We first plot a curve in a plot widget and we plot the result of a curve on a visualizer widget.

You can experiment some interactions:

It is possible to add new reactions at anytime by calling the add_reaction method. Here we add two reaction to handle the text area and the range widget that are on the second tab of the interface.

The second reaction as a process: the reaction to a message takes time because we move the dot of the xy widget along an arbitrary curve. The current position of the dot is recorded on the $x and $y slot of the object. A curve is used to send messages to the widget to update the dot position and the $x and $y slots. Before making the animation, we abort other curves taht may have been launched by previious interaction and that have are not yet finished.

The library defines an object which materializes the interactions with the server and the client. The object defined here is only a toy example and must be enriched to face real use case. However it gives a good idea of the architecture that ca be developped to interact with Open Stage Control.

The construction of an obj::OpenStageControl has a lot of parameters but each of one has a sensible default value and most of the time it can be omitted in the object instantiation. The use of nammed parameters also ease further instantiation.

The parameters have the following meaning:

These parameters are linked to parameters that can be specified through command line arguments or on the launcher interface: 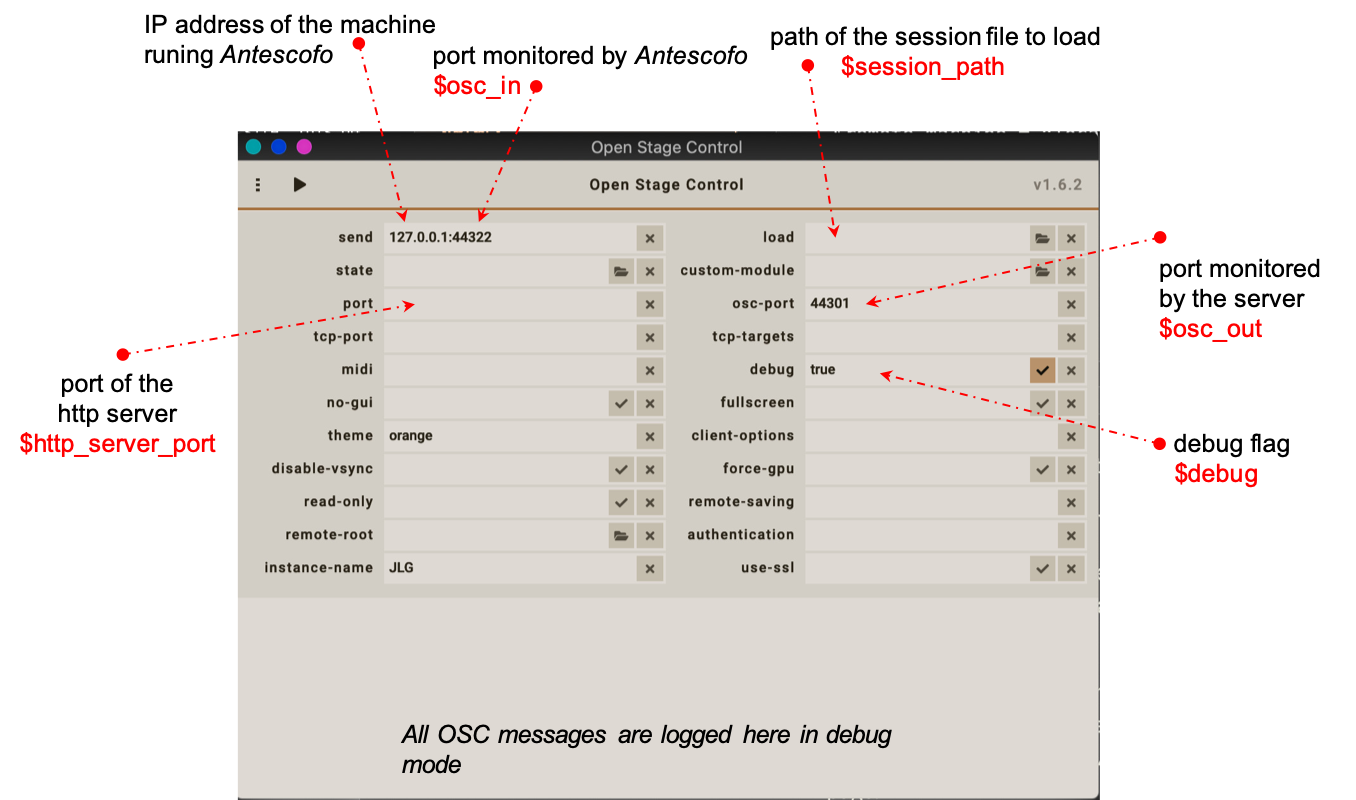 There is few slots defined for this object: $x and $y are used to record the current position of the xy area used in the first tab of the interface; $cmd is used to build and record the command used to launch the server ; a d$recv_msg wil be used to handle incoming messages.

If the server must be launched by Antescofo, then we build the command line and we execute it using the function @system. When the server is running, we start the predefined session. Server and clienst can be operated remotely using a set of predefined OSC message.

When the object is killed, we display a warning recalling that the server must be killed too.

The object watches the local variable $recv_msg which is updated on the reception of an OSC message. When such a message is received, we can look into the reaction map if there is a key that corresponds to address of the received OSC message (the address of the OSC message coming from a widget, is the identifier of the widget with a leading /.

Here are some example of additional methods for the convenience of the object user: