Antescofo is used for computer arts involving live interaction and synchronisation between human and computerised actions. An Antescofo score is a text file, a program in a dedicated language that fulfills two purposes: it is used to specify real-time score following (detecting the position and tempo of live musicians in a given musical score) and to specify electronics action andtheir real-time triggering as written by the artists.

An Antescofo score can be edited by any text editor. The users can find syntax highlights for various text editor (sublime, atom, emacs) on our Antescofo ForumUser. With Max, the score file is monitored (file watch) so any changes through an editor is reflected in the score loaded. The Sublime editor is especially recommended as the syntax colouring is the most complete and because it allows to send (via OSC messaging protocol) a selected expression to Antescofo for an immediate evaluation.

There was a dedicated GUI which is now deprecated, AscoGraph, that was used to edit an Antescofo score and to interact with a running Antescofo program. The mention of Ascograph still appears in some place in the documentation, but the tool is not longer functional. For example, in the video below, we can see Antescofo playing with a musician and controlling both the electronic elements and the spatialization. The musician's score (in a piano roll) and the electronic actions are both visible in the AscoGraph window. Take a look to this post for replacement solutions.

An interweaving of musical events and electronic actions¶

An Antescofo score describes both the human actions to be recognized and the machine's reactions to environmental input. A score thus has two main elements:

The figure below shows a simple example from the Composer Tutorial on Pierre Boulez’ “Anthèmes 2” (1997) for violin and live electronics as it was seen in Ascograph (open the picture in a new tab for a larger view).

The left window shows a visual representation of Events and Actions, whereas the right segment shows the raw text score. Events in the score describe expected notes, trills and grace notes from the solo Violin, and Actions specify messages to be sent upon recognition of each event. In this example, we showcase actions for four real-time pitch shifter (or harmoniser), whose general volume is controlled by the hr-out-db parameter, and each shifter parameter separately controlled by hr1-p to hr4-p. The values for pitch shifters are in pitch-scale factor. Their corresponding musical value is described in the text score as comments (any text following a semi-colon ‘;’ is ignored in the score).

This score shows basic use of actions and events. Red text in the text-editor correspond to reserved keyword for Events. For details regarding available events and their corresponding syntax, see section Event. In this example, actions are basic message-passing to receivers in Max or Pd environments but with OSC, Antescofo can interact with many other softwares like CSound, Supercollider... Since they are isolated and discrete actions, we refer to them as Atomic Actions. As will be shown later, actions in Antescofo can use delays expressed in various time formats, and further include dynamic (i.e. real-time evaluated) expressions, data-structures and more. Details on action structures are discussed in section Actions.

The next figure shows a slightly more complex score corresponding to the beginning of “Tesla ou l'effet d'étrangeté” (2014) by composer Sasha Blondeau for viola and live electronics as it was seen in Ascograph. The graphical representation on the left is a visual interpretation of the text score on the right. For easier viewing, messages are represented here by white circles. 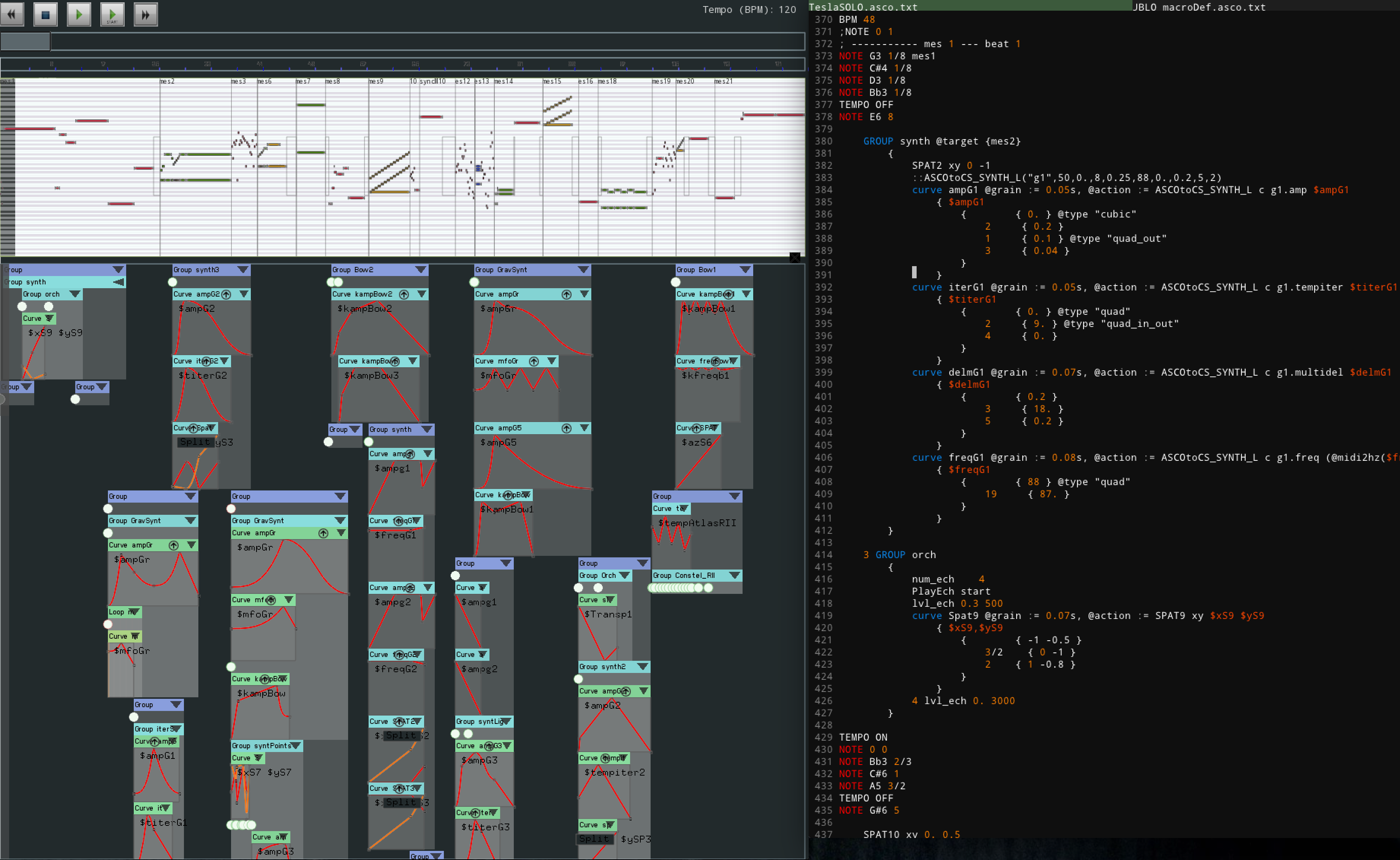 In the previous screenshot, the score for human musician contains many types of events (not all visible in text) with a mixture of discrete and continuous compound actions as written by the composer. At the moment you have to know that in Antescofo it exists 5 kinds of events :

Tesla makes use of Compound Actions which consist of parallel groupings of Atomic Actions, as well as continuous actions introduced by keyword Curve. These elements correspond to different electronic actions. We can therefore compose the electronic part in parallel with the instrument part, together in an "augmented score". Effects, synthesis, spatialization and others can be controlled by Antescofo. Functions, Processes, Actors (objects) and Macros can be used to abstract and reuse these controls.

We will see that with Antescofo, we can compose with many differents kind of time. Sequential time for the atomic actions, continuous time for curves, cyclic time for loop or "composed time" with processus that will see in due course.

A textual score, or program, is written in a single file and loaded from there. The file itself can optionally include pointers to other score files, using the @insert feature:

The keyword can be capitalized: @INSERT as any other predefined @-keywords (i.e., identifiers that start with a @ character). An included file may includes other files. The @insert command is often used to store definitions and initialisation of the main Antescofo score.

The @insert_once command is similar to @insert except that the file is included only once in the current score, when the directive is encountered the first time. The behavior makes possible to include a library of primitives in a set of files without the burden of taking care of their dependencies.

For the rest of this chapter, we will briefly introduce main elements in the language. Details will be left for dedicated chapters in the reference manual.